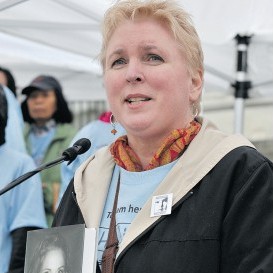 Catherine Adamson says most people don’t believe her when she tells them B.C. medical personnel who commit errors leading to the wrongful death of a child are effectively out of range for legal damages.

Since her daughter died in Royal Columbian Hospital in 1997, Adamson has been fighting to change B.C.’s Family Compensation Act, which limits financial compensation for wrongful deaths to those who had dependents.

“When I tell people, they say, ‘No, that can’t be true,’ ” said Adamson, Vancouver-based spokeswoman for B.C.’s Wrongful Death Law Reform Group.

Adamson’s daughter Heidi Klompas, then 17, suffered a brain embolism after a long delay in getting her broken legs set after she was hit by a drunk driver in Surrey. When the brain injury was treated, a trachea infection caused massive bleeding and she died.

“People can make mistakes and cause the death of a child and have no repercussions,” Adamson said. “They’re protected by the Family Compensation Act, so they’re untouchable.”

All the errors in Heidi’s death were preventable, said Adamson, noting the B.C. Coroners Office made many recommendations for changes as a result of an inquest.

The reform group has joined forces with the Trial Lawyers Association of B.C. in fighting for new legislation they call the Wrongful Death Accountability Act.

The proposal would hold negligent or irresponsible people to account for their actions as well as address financial compensation for those not currently covered.

Currently, families have the right to sue for wrongful death of a child, or a retired or disabled person, but they could go bankrupt paying court costs in return for nominal damages, said Don Renaud, chairman of the Trial Lawyers Association committee on wrongful death.

In November 2009, the association submitted six key objectives for a new law to then attorney general Mike de Jong — put together at his request.

By mid-2011, the association began promoting its accountability act and supplied it to Attorney General Shirley Bond and her staff.

On Friday, Bond issued a statement saying that she understands how “incredibly difficult” losing a loved one would be, but due to the complexity of the issue, “we are carefully considering the next steps, which may include legislative changes.”

The province continues to review the Trial Lawyers Association proposal, but Bond said there were strongly held opposing views and she could not commit to a specific time frame for any change.

Both Adamson and Renaud said it’s the kind of response they’ve been getting for years.

Both added the only strong opponents are insurers that would stand to pay out more in judgments for wrongful deaths.

They cited ICBC and the Canadian Medical Protective Association, which provides malpractice insurance for physicians. ICBC is a provincial Crown corporation and the province has had a long-standing agreement to subsidize CMPA premiums for thousands of B.C. doctors, an amount that had reached more than $18 million a year by 2008.

As for the Trial Lawyers Association’s proposal, “I’m not happy they’re still reviewing it,” said Renaud. “It’s been going on so long. I don’t know how long we have to wait.”

Adamson is similarly frustrated, envisioning the province “doing nothing” or waiting for more stakeholder studies that say it will cost too much to do more than “some minor adjustment.”

Renaud said Alberta has at least “thrown a bone” at the issue by offering $75,000 for parents who lose a child.

When Heidi died, Adamson’s lawyer told her it would cost hundreds of thousands of dollars to take two hospitals and several doctors to court, all for $20,000, at best, under the current act.

That prevented Adamson from suing and finding out who or what was ultimately responsible for Heidi’s death. Coroners’ inquests do not lay blame.

The courts have “tried to plug the hole a bit” by awarding nominal amounts for the loss of care and guidance of a parent who did not work, Renaud said.

Elderly and disabled people are vulnerable under the current system, Renaud said. When non-earners are injured and require a lifetime of care, agencies and individuals can be sued for large amounts. When they die, so, effectively, does the right to significant damages.

“We’ve set up our legal system this way and it’s just wrong,” added Adamson. “This is about justice, about having the ability to punish someone for causing the wrongful death of someone else.”

To those who say parents would get greedy after the wrongful death of a child, Adamson says they are often so traumatized, they ultimately lose their jobs and can take several years to get back on their feet.

The group wants changes that specify that half the money that comes from punitive damages goes into funding legal aid, she added.

Every year, Renaud is faced with telling people whose loved ones have died under “egregious circumstances” that the law does not recognize their loss.

A new act should provide damages for anguish and grief caused by wrongful actions, compensation for lost companionship, guidance, care and protection and the ability to seek punitive damages for wilful and reckless conduct, the Trial Lawyers Association says.

The vast majority of injury cases settle out of court and it would be the same for wrongful death, Renaud said.