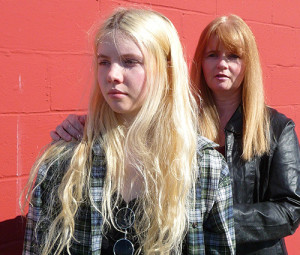 Five years after the death of her father, Cloverdale’s Rita McDonnell is still demanding better protection for B.C.’s seniors.

Rita’s father, Gary Davis, a retired postal worker, was 68 when he passed away in 2009 after developing bedsores and hospital infections in a long-term care facility in Langley.

He’d initially been hospitalized for an aneurism in his groin, and his medical condition was too complex to bring him home. He spent time at Royal Columbian and Langley Memorial hospitals, where he developed bedsores, something McDonnell says wasn’t brought to the family’s attention until the situation was serious.

“I was naive at the time, thinking bedsores were tiny, but they weren’t,” McDonnell says, referring to a photo showing a photo of a gaping hole about the size of a tennis ball in her father’s back.

“I wanted to know why he smelled so bad,” she says. She had no idea what was happening, and so began asking questions.

He was later transferred to a long-term care facility in Langley, but he still didn’t heal.

As another Father’s Day arrives without him, there were other disturbing incidents that still haunt the family. One day, McDonnell says she was visiting the facility with with her children and they could hear screams coming from her father’s room.

The nurse left, and after they went in, her father pulled her close and said, “Rita, make sure you know who that nurse is. He’s too rough with me.”

She says her father was also neglected and starved. But complaints seemed to fall on deaf ears.

Before his death, her father eventually lost both legs due to complications from the bedsores.

“The only thing he ever wanted was justice for what happened to him, but you cannot get justice. If you get put in a home, you have no legal rights. Your rights are taken away,” says McDonnell, whose family’s story is featured in a new documentary that premiered this spring called Hope is Not A Plan.

Directed by Colin Andrew Ford, Hope is Not A Plan looks at the consequences for Canadians with disabilities through the eyes of Paul Caune, director of Civil Rights Now, a non-profit organization of people with disabilities.

The film, which is now available for streaming, points out that 56 per cent of Canadians over the age of 75 are disabled, suggesting it’s an issue that many Canadians will inevitably grapple with.

The film argues people with disabilities who are in care do not have a practical way to enforce civil rights guaranteed to them under the Canadian Charter of Rights and Freedoms when things go wrong, making them vulnerable to abuse and neglect.

The film looks at several cases across Canada, including Rita’s story, uncovering some disturbing facts along the way. For instance: according to the B.C. Ombudsperson, quoted in 2012, “The Ministry of Health does not require care staff to report information indicating seniors receiving residential care services are being abused or neglected.”

Further, B.C.’s Health Ministry doesn’t require service providers to notify police if an incident of abuse or neglect that may constitute a criminal offense, the film states.

Recalling her father’s last years and months, McDonnell says she felt powerless. “I trusted the hospitals and the care homes.”

In telling her story she says she only wants to bring awareness to other families.

“I talk to people in my age group, but they don’t seem to understand,” she says.

“If it doesn’t change now, it’s going to happen to us in our old age,” she warns. “We need real justice. Real accountability,” she says, adding people need to be more vigilant when it comes to the care of elderly relatives in seniors homes, extended care facilities and hospitals.

“In the beginning, I was so naive. I wish I knew more questions to ask.”

In 2008, McDonnell filed a complaint with the B.C. government’s patient care Quality Review Board, which concluded the matter raised several care quality concerns, according to Lois Sampson, an advocate who writes a blog called Seniors At Risk.

Sampson also points out a letter to McDonnell from the Ombudsperson’s manager of system review says “…we did not investigate your complaint.”

“Instead,” writes Sampson, “they chose to keep the file open to ‘help inform our systemic investigation into senior’s (sic) care,’ referring to the Ombudsperson’s report entitled, The Best of Care: Getting it Right for Seniors in British Columbia.”

“In other words,” Sampson writes, “the Ombudsperson’s Office did nothing at all about Gary Davis’ horrific two years of neglect and rough care at the hands of publicly funded hospital and long-term care facilities and staff.”

She noted Ombudsperson Kim Carter apologized for the length of time it took to respond, but offered no explanation.

Since Davis’ bedsores were so severe, his bones and organs were visible, Sampson believes, “These are not injuries caused by lack of call-bell response time standards, this is systemic institutional elder abuse.”

Meanwhile, the memory of what her father went through and the feeling of powerlessness lingers for the McDonnells, who live in Cloverdale.

This spring, their daughter, Sara, 18, conceived and produced a music video  titled For Grandparents – Breaking the Silence of Institutional Elder Abuse, along with her friend Alexa Tarrayo. Sara sings and plays guitar in the video, titled. It’s set to the tune, “When I’m Sixty-Four.”

“This song has brought my family so many happy memories,” it starts off. “Now it stands for so much more.”

Since coming forward several years ago, Rita McDonnell has been contacted by others with their own stories.

“They’re scared. They don’t know what to do,” says McDonnell. “You have to talk about it, otherwise nothing changes.”