In B.C., only wage earners or guardians can collect damages in wrongful death lawsuits 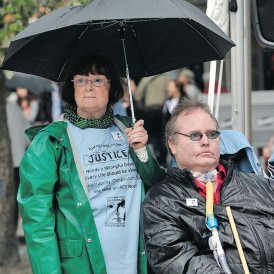 At present, they say, the laws mean no damages can be awarded in wrongful death cases unless the victim was a wage earner or guardian of dependents.

The group, which includes about 50 families who have lost loved ones due to what they believe is medical malpractice, demonstrated on the steps of the Vancouver Art Gallery on Sunday afternoon.

They want the province to repeal the Family Compensation Act, and amend the Estate Administration Act, which together prevent damages from being awarded in wrongful death suits in cases where the victim was not a breadwinner.

The organization wants a Wrongful Death Accountability Act that would extend the ability of family members to sue and win damages for the loss of all loved ones, regardless of age or earning capacity.

About 60 people attended the rally, many wearing matching blue T-shirts with “BC Needs a Wrongful Death Act,” emblazoned across the font.

“Every Life Should Be Valued,” the shirts also read.

Catherine Adamson came to tell the story of her daughter, Heidi Klompas, who died when she was 17 following a series of in-hospital complications.

Klompas suffered two broken legs after a drunk driver plowed through a group of teenagers at Stokes Pit park on the border of Surrey and south Langley on Sept. 13, 1997. During treatment, Klompas fell into a coma after fatty tissue from her severed bone marrow entered her bloodstream, causing brain seizures, Adamson said.

The doctors performed a tracheotomy in the latter stages of the coma because Klompas had started to vocalize, and they wanted to keep her breathing while protecting her vocal cords, Adamson said, clutching a book she wrote about her daughter’s death.

They made the incision too low, which caused infection and heavy bleeding in the trachea and surrounding arteries, she said.

“She downed to death, with her arms tied to bed rails,” Adamson said. “It was really gruesome and horrific.”

Adamson wasn’t able to sue the hospital or its staff for the malpractice damages because Heidi wasn’t a wage earner.

Everybody has the right to sue for malpractice, but B.C.’s legislation prevents awards for damages when a “breadwinner” hasn’t died, said Don Renaud, a Vancouver trial lawyer who has been one of the leaders of the effort to change the legislation.

Renaud said he’s not optimistic that the provincial government will make a priority of changing the legislation.

“In 2007 the attorney-general’s office spent a lot of money studying the issue… but the wheels came off the bus,” he said.

Interest by former attorney-general Mike de Jong in revisiting the matter also failed to result in changes to the act, he added.

The Trial Lawyers Association of B.C. helped the families draft a proposed new law, Renaud said, but it has yet to be introduced into the legislature. 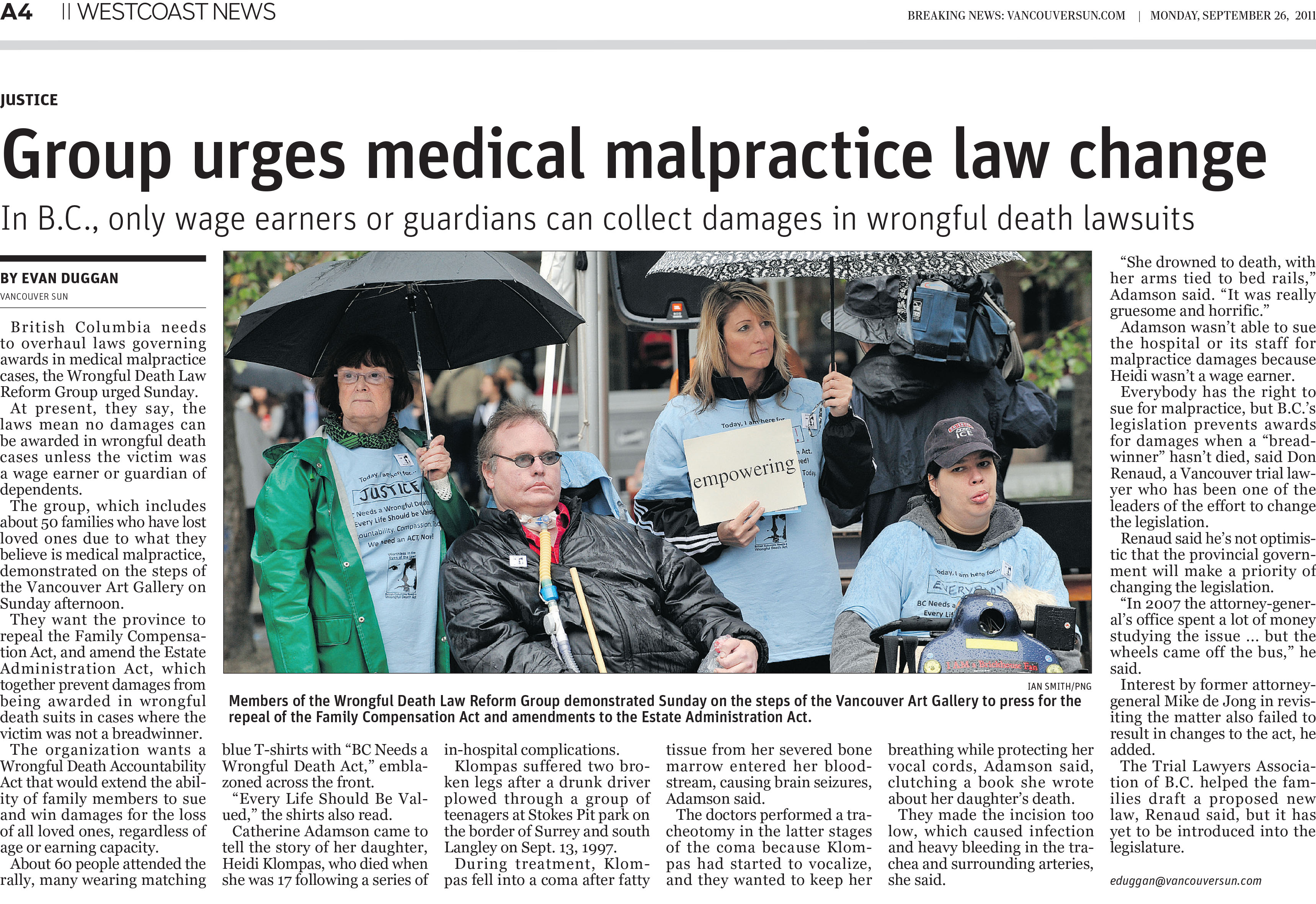