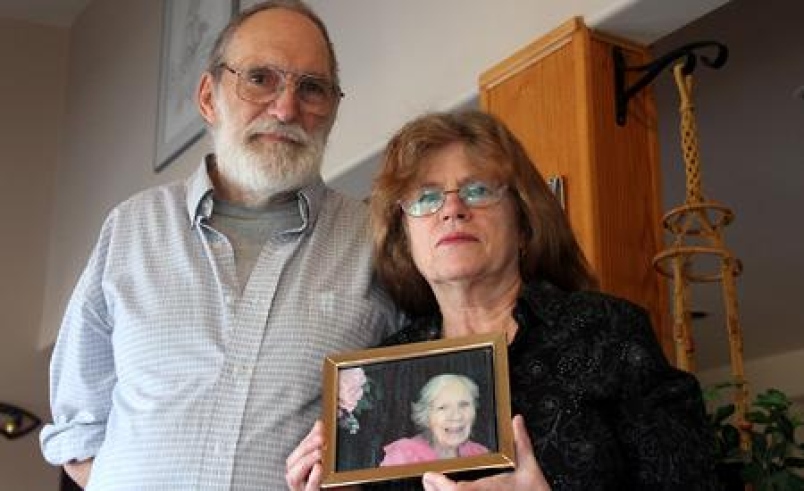 Herron’s bones were brittle. She couldn’t stand up without assistance. She needed a wheelchair to get around and a special bathing chair to get into and out of the bathtub. She died October 12, 2011, six days after slipping out of her elevated bathing chair and hitting her head on the floor.

Herron’s death was deemed accidental by the BC Coroner Service, but a year later her family still struggles to come to terms with it. Both Vancouver Coastal Health (VCH) and Olive Devaud Residence have investigated the incident and say they have made changes to bathing procedures, but Herron’s daughter Gwen Law, and son-in-law Larry Law, say their family is frustrated.

“They wouldn’t come out and say if someone has been held accountable and if they have taken action to correct this,” said Gwen. “Instead they’ve just blamed the system as a whole. They called it a system failure.”

Anna Maria D’Angelo, VCH’s senior media relations officer, said the incident has saddened everyone at the facility and everyone involved at VCH, but they have provided the Law family with reassurances that Herron’s death was taken seriously.

“We have made many changes to staff training and bath procedures to reduce the likelihood of accidents like this happening again,” said D’Angelo. “We have provided the family with a detailed account of what happened, but due to privacy laws we can not provide them some information. We don’t believe that those details have diminished their full understanding of what happened or how we dealt with it.”

However, the family remains skeptical.

“People get suspicious and wonder,” said Jason, Gwen and Larry’s son. “It seems like they’re hiding behind privacy laws.”

Larry added that when a drunk driver kills a person on the roads, the driver gets named in the media. “What’s the difference here?” he asked.

After receiving the coroner’s report on her mother’s death, Gwen knew mistakes had been made. A retired licensed practical nurse, Gwen worked as a care aide in Olive Devaud for five years and used to bathe patients in the same model bathtub that her mother was bathed in on the day of the accident.

“I couldn’t figure out how someone could slip from the chair if the belt was tight and proper procedure was followed,” she said. The coroner’s report confirmed that the accident happened due to human errors and not equipment failure.

Gwen and Larry were taken aback when, despite mistakes being made, lawyers refused to pursue a lawsuit against the health authority. Because Herron didn’t earn an income and provide for dependents, there was no way under BC law to sue for a possible wrongful death.

“The lawyer said there was nothing anyone could do,” said Gwen. “It’s too late for Mom, but I’d like to see the wrongful death act updated for other people.”

The Law family are among many families in the province who want the government to update the law. The Family Compensation Act deals with cases of wrongful death and dates back to 1846, before Canadian Confederation. Reformers say it’s outdated and doesn’t reflect modern times.

Ben Doyle is a Vancouver lawyer with the Trial Lawyers Association of BC who has been working on reforming the law since 2005.

“It takes into account the direct financial losses resulting from death,” Doyle wrote in a 2007 white paper on the law. “It fails to acknowledge the multi-layered collective experience of affected families. Children, seniors and people with disabilities who may not represent a measurable financial loss, for example, are among the classes of people whose lives are not fully ‘valued’ or respected after they die.”

The law disallows damages for the intangibles of lost love, guidance, care, companionship and affection. Causes of wrongful death range from reckless driving to poor medical care to faulty use of equipment.

“When the preventable circumstances contribute to the death of a loved one, the family’s grief is compounded by outrage,” Doyle wrote in the paper.
In some cases the law ensures further insult to injury when a family member dies. After Dallas John Hein, 25, a firefighter from Sechelt, was killed by a drunk driver in 2005, his family learned from ICBC (Insurance Corporation of BC) that if he had been just injured in the accident and not killed, he would have been eligible for compensation under third-party liability insurance. Because he wasn’t married or had children, his family could not sue for damages.

“It’s a case where there’s just a striking lack of law,” Doyle told the Peak during a phone interview. “You get a lot of smart people in the same room saying the same thing and you’re not really hearing strong voices against it.”

Doyle contacted the attorney general’s ministry last month for an update and received a letter from assistant deputy minister John Chalke dated September 19 which read: “The ministry is continuing to look toward advancing this initiative but we are unable to provide you with any firm commitments on the status of the legislative amendments at this time.”

While everyone agrees the law needs to be changed, Doyle said the question of who will pay for this accountability looms in the background.

“Governments are going to end up footing the bill, so they’ve got to protect themselves,” he said.

He added that governments would end up “footing the bill for legal defence in malpractice lawsuits and insurance companies don’t want to have to pay out more. It comes down to what’s it going to cost? Cost for us is not the issue, it’s the justice for families. You shouldn’t be able to kill someone and have it less of a problem than if you injure them.”

Larry believes if governments felt the financial sting of compensating families when mistakes are made, then “they might pay closer attention to what’s happening.”