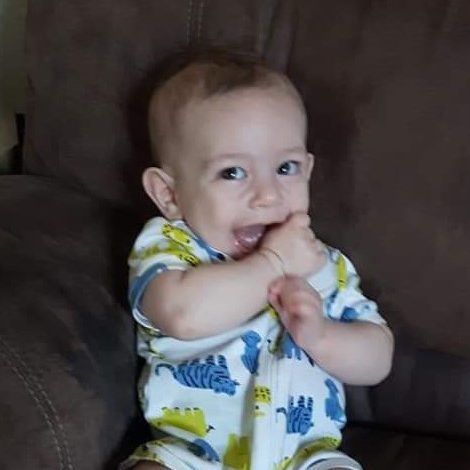 Told by his mother, Shayla

“My son, Xavier Mena, was born on January 7th, 2018. I had a complicated pregnancy, and had to be on bed rest from twenty weeks onwards due to placental bleeds. After Xavier was born, I noticed a few things that worried me a lot. For example, he couldn’t lie on his back for more than a couple of minutes without crying as if he was in pain. I mentioned this to my doctor several times, but he dismissed my concerns.

I used to take Xavier to my sister’s house all the time, to visit with her and my niece. In March of 2018, my two year-old niece became extremely sick, and was diagnosed with a rare cold that affects the blood cells associated with leukemia. Fast forward to the end of March – Xavier was also showing some worrisome symptoms, so I took him to a walk-in clinic. He was very congested, so they listened to his chest. They told me to take him home and try a steam, and to go to the ER if his symptoms changed or got any worse.

I took him to the ER around 2:00 pm the next day. He had thrown up the only bottle he had had all day, and his head was boiling hot. His eyes were glazed, and there was a strong raspiness in his breathing. When we got to the ER, the first resident doctor we spoke with was quite concerned, and even called my sister to request her permission to look at my niece’s bloodwork. When the training doctor came in, she refused to do this unless it was deemed a serious illness. Even though he was completely pale, dazed, had glazed eyes, and was clinging to me, she stated that he didn’t look sick to her. I asked about taking a swab or doing bloodwork, but the doctor refused to do any tests. She listened to his chest and mentioned that he had a questionable raspiness in the left side of his chest, but sent us home with no information as to what might be causing it, or what signs I should watch for.

I had an appointment with our family doctor in the middle of April, and explained what happened. Xavier had still not fully recovered – any time he would teethe or become upset, his head would boil hot, and the raspiness never went away. Again, my family doctor dismissed all of my concerns, saying that this was most likely because his trachea was not yet fully formed. He did not follow up with any tests, even though my niece had been very ill the month before and Xavier’s symptoms were not improving.

On May 6th, 2018 my world came crashing down. I had laid Xavier down for a nap. When I went to check on him about twenty minutes later, I found him blue and not breathing. I panicked and ran him out to my sister, who immediately started CPR as I called 911. Around 3:00 am on May 7th, a doctor from the Pediatric ICU at Sick Kids Hospital in Vancouver gave me the news that no mother wants to hear – we could risk the flight from Prince George to Vancouver, but there was over a 50% chance of him suffering another cardiac arrest on the flight. She then told me that he had not had any brain activity for about seven hours, and declared him brain dead. I was told that even if he was able to survive the flight to Vancouver, there was a slim chance that they could do anything to help him.

My husband and I had to make the horrendous decision to remove life support at 2:45 pm that day. After three years of trying and three miscarriages, I lost my precious son in the blink of an eye.

Since his passing, I have collected all of Xavier’s medical records, as well as my own. I discovered that I was lied to by my family doctor, my gynecologist and the ER doctor. I found out that during my pregnancy, when I had to beg my doctor to put me on medical leave because of my placental bleed, I was actually on the verge of a placental hemorrhage. It’s a miracle that Xavier even survived the pregnancy. I also found out that my son had dropped sixty percentiles on the growth chart within a month a half. None of this was ever discussed with me.

When I received Xavier’s autopsy results on May 4th, 2020, I found out that he had an enlarged heart (cardiomegaly), which was likely the result of a probable cardiac arrhythmia. He died of complications from a viral respiratory tract infection, which exacerbated his heart condition. Both the ER doctor and my family doctor refused to do any tests to find out what was causing my son’s symptoms. Both his viral infection and his heart condition went undetected, and untreated.

After receiving these records and discovering all of the things I was never told about my son’s health, I strongly believe that his death was the result of medical negligence. I spoke to a lawyer who confirmed that because my son had passed away, no legal action could be taken. This would only be possible if he were injured, but still alive. My heart aches because there may be no justice for what happened to my little boy. The doctors, who refused to perform tests on my son, who lied to me and neglected to tell me things that I should have known about my son’s health, may never see any consequences. I am so beyond frustrated and sickened by our legal system. This is my son Xavier Mena’s story; I hope that it can help to bring about change.”

I am writing to you about the preventable death of 4-month-old Xavier Mena and British Columbia’s woefully outdated wrongful death laws; which are still based on colonial era legislation from 1846.

Xavier Mena, sadly, is one of these cases where no accountability can be brought against wrongdoers who were negligent in their duty of care. His story can be read here – https://intheirname.ca/our-stories/xavier/