Unlike most European and other legal systems worldwide, German law has not yet granted any compensation for the immaterial damage caused by the death of close relatives. This was justified by the argument that this would have been a payment for a party that had been only indirectly injured – a result not desired under German law – and compensation was only awarded if the death of the relative had an immediate effect on the body or health of the bereaved. However, especially after the crash of Germanwings flight 4U9525 on 24 March 2015, this provision was questioned by the general public. In particular, it was considered unfair that the damages were higher if the victim of a violent act survived.

In 2012 a first draft to amend this provision was submitted by the Bavarian Ministry of Justice, and the introduction of a Bereavement damages claim was agreed upon in the coalition agreement of the Federal Government in 2014. The provision was enacted on 17 July 2017.1 This article gives an overview on the current status and identifies questions still to be answered. At the same time, an attempt is being made to predict how the new Bereavement damages will develop in the future and to assess the financial impact it might have on the insurance industry.

Figure 1 shows the different amounts of compensation that various countries paid – before the introduction of the new provision on Bereavement damages in Germany – in a case involving the death of a 41-year-old father with a wife and two children (six and nine years old) and a net annual income of EUR 40,000. 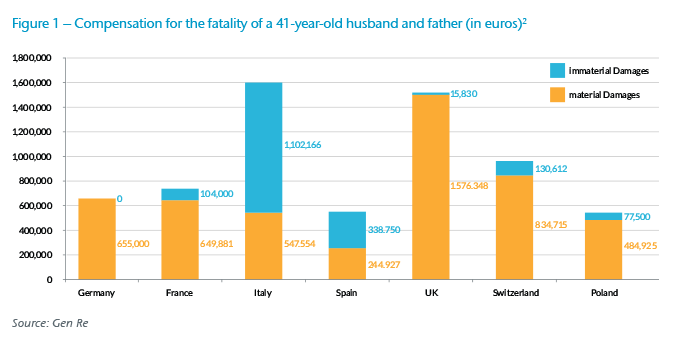 The comparison highlights the fundamentally different compensation systems in Europe. In most countries the main goal is to concretely compensate the damage incurred; therefore, the compensation is determined by the material damages. The loss of spousal support is calculated concretely and then capitalized with the help of current mortality tables and (legal or judicial) interest rates. The bereavement damage is considered a more symbolic compensation. In other countries, such as Italy and Spain, the non-pecuniary damage accounts for well over half of the total compensation. These two countries have opted for a largely tabular compensation approach. The concrete damage is taken into account only to a limited extent, but high amounts for the immaterial damage are granted, which should also compensate the undervalued material damage in the individual case. Thus, for example, according to the new Baremo in Spain, the widow of a 67-year-old killed after 15 years of marriage receives a lump sum of EUR 90,000. These base rates are then adjusted individually by lump sums or percentage increases.

In Figure 2, the difference in the countries’ approaches becomes even clearer when we compare the countries’ compensation amounts for surviving parents and 14-year-old sister after a 17-year-old adolescent is killed. 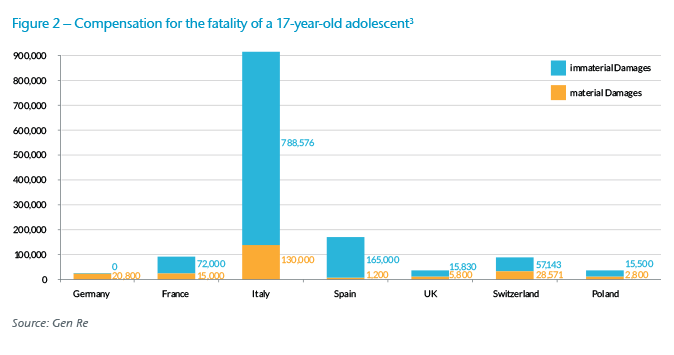 The new provision of §844 (3) BGB grants a compensation to the bereaved for immaterial damage in the event of the tortious death of the related deceased. An adequate causation and negligence are also required. At the same time, the legislature decided to establish this kind of compensation with identical regulations for most laws covering strict liability.

For the definition of the bereaved, the law demands a special personal proximity between the survivor and the deceased. The law presumes res ipsa loquitor that such a proximity exists for spouses/life partners, parents and children. To refute this in practice will often be very difficult, if not impossible. For other survivors, such as companions, fiancées, step- and foster children, and siblings, it is possible to prove the proximity.

Amounts to be granted

Given the variety of solutions in Europe described above, the proposals for assessing the amount of such Bereavement damage diverged widely in the parliamentary discussion. Dogmatically comprehensible and correct, the legislature has ultimately put them in the discretion of the courts. Thus a tabular approach, which also includes material of damage – as in Spain and Italy – could not be chosen due to the fundamental differences in the compensation approach. It was discussed beforehand whether or not an amount set by the legislator (as in the UK) would solve the problem. Amounts of EUR 10,000 to EUR 25,000 were proposed. In the deliberations in parliament, even amounts of EUR 30,000 to EUR 60,000 were discussed. Ultimately, it was decided to remain true to the historical approach of trusting in the judiciary and not to make any specifications, as in the UK or in France. However, in the reasoning of the bill a cost estimate is given. This calculation, which will be discussed at the end of this article, takes into account the average amounts “of about 10,000 euros, which are granted by the courts as a compensation for so-called shock damages which go beyond the usual level of grief and mental suffering if a relative was killed.”4 It can be expected that this amount will be claimed by default in the future. On the other hand, the case law on shock damages is by no means as clear as the legal grounds imply. On average, compensation amounts in these cases are below (sometimes even way below) this amount.

In addition, the legal grounds of the new law state that the right to a claim for non-material damage after shock damage is to persist, and the Bereavement damage should be subsidiary in these cases. For that reason alone, the amount for Bereavement damage must fall short of a real claim for pain and suffering.

The costs for the insurance industry

According to the legal grounds for this law, the cost of Bereavement damages will amount to approximately EUR 240 million per year. This calculation is based on 3,000 cases from auto liability; 1,500 medical liability cases; 1,000 other cases of general liability and 500 homicides. Furthermore, people in four cases of bereavement are expected to receive EUR 10,000 each. At insurance industry conferences, in some cases even sums up to EUR 480 million had been discussed.

This estimate, however, can be revised downwards significantly: No more than 2,000 claims can be expected from the auto liability area. The starting point here is the statistical number of 3,206 traffic fatalities in Germany in 2016, which included 895 deaths after single-vehicle accidents. A deduction is to be made for the cases in which the deceased himself caused the accident.

From general liability, only 2,000 people are eligible (1,000 medical liability cases and 1,000 other cases). Also, the average number of bereaved people is at best to be set at three beneficiaries, and in view of the previously mentioned statements concerning the amount of the bereavement damage, the average amount, EUR 7,500 is likely to be given. Thus, in the author‘s opinion, the expected cost can be assessed at EUR 90 million. Even with a security surcharge, in my opinion no more than EUR 100 million of additional costs can be expected.

The industry will have to wait to see what happens with these new bereavement damages, and what the financial impact, if any, is for us.