The article below describes how a Vancouver Island Health Authority employee Veronica McCaffrey, who has practised law for 36 years, discovered widespread failures in the medical system. Under Law Society of BC Professional Code of Conduct Guidelines, specifically section 3.2-8, she was professionally obliged to bring this misconduct to the attention of executive leadership. She was then ignored, and thereafter strategically and maliciously undermined by her peers, including Vancouver Island Health Authority CEO Kathy MacNeil.

This story is yet another indication as to why our government institutions are incapable of self regulation. We need to ensure we have a robust tort system with access to justice for all in our province, in order to hold our institutions accountable, incentivize policy change, and deter negligent and wrongful actions.

Unlike all other provinces in Canada, under BC’s current wrongful death legislation, only family breadwinners currently have worth under our antiquated 174 year old law. When it’s ‘free’ to kill most people in BC under the law, we enable a system of survivorship bias, whereby actions contributing and causing wrongful death are never addressed through legal deterrence mechanisms.

The article begins below… 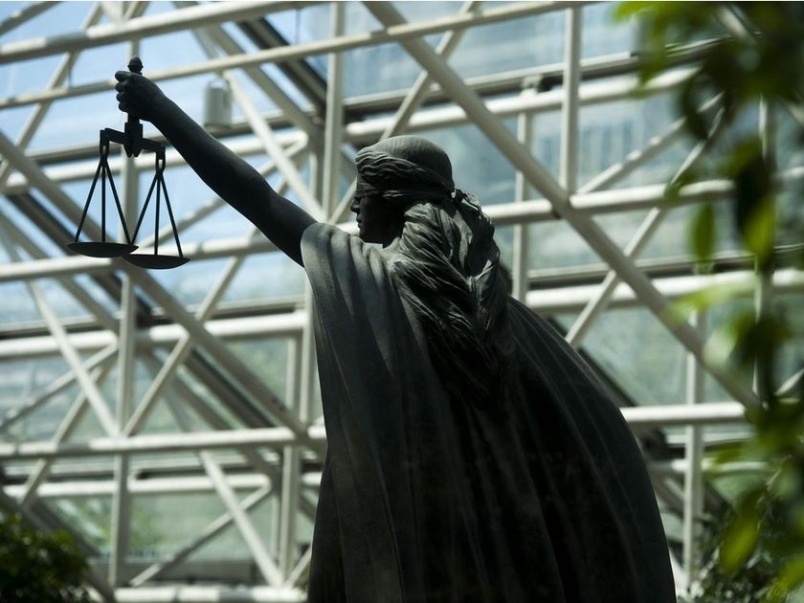 The Scales of Justice statue at B.C. Supreme Court in Vancouver.
Photograph By JASON PAYNE, PNG

A lawyer is suing Vancouver Island Health Authority, claiming she was ostracized, labelled as mentally ill and unfairly terminated as director of risk management and senior legal counsel for the organization after she raised concerns about “widespread failures.”

Veronica McCaffrey filed a notice of claim on Feb. 1 in B.C. Supreme Court against the health authority, and president and CEO Kathy MacNeil.

None of the allegations has been tested or proven in court, and Island Health has not yet filed a response to the civil claim.

In a statement, Island Health said that while it has a legal and ethical duty not to publicly comment on matters regarding employees, or issues before the court, “Ms. McCaffrey’s view of the events is not consistent with that of Island Health and will be answered in the response which will be filed with the court.”

McCaffrey, who has practised law for 36 years, says she was lured from a secure job in Alberta Health Services to work as director of risk management, senior legal counsel and whistleblower lead with the promise of a long-term commitment and increases in wage and responsibilities.

McCaffrey says her comprehensive review and evaluation of the organization during her first eight months of employment “pointed to a shocking state of affairs, widespread failures in law and compliance, an absence [of] basic standards,” as well as “conduct and culture from the top that paralyzed whistleblower reporting,” putting patients and staff at risk.

McCaffrey says she had serious concerns about legal and compliance issues, as well as “concerns of harassment and abusive behaviour by senior leadership and other management staff.” She points to an “employee culture of fear.”

McCaffrey claims in court documents that she recommended “urgent necessary actions and solutions.” When no meaningful steps were taken to address significant problems, she says, she attempted to bring her report to the attention of higher levels of authority.

McCaffrey claims that when she did this, her immediate supervisor retaliated by removing her from work, on the false premise that she was “mentally ill” and not fit to work.

“Island Health avoided completing the investigation by terminating the plaintiff before her complaints were investigated,” McCaffrey’s claim says.

“When the plaintiff reported the matters to the Minister of Health, Adrian Dix, in accordance with the Whistle Blower Policy, the minister failed to respond,” it says.

When she was allowed to return to work, McCaffrey says, she was ostracized until she was “actively removed from the workplace in an embarrassing and humiliating manner on a second occasion, and denied access to her files.”

Days later, on Aug. 4, 2017, McCaffrey says, she found Victoria police at her door inquiring about her health. She says she had to tell them she was fine and that “Island Health was acting improperly by using the police to intimidate her and retaliate for an employment-related complaint she had filed.”

Referring to a freedom of information request, McCaffrey claims it was MacNeil who contacted police, alleging McCaffrey was suicidal.

“The statements were untrue, were known by Kathy MacNeil to be untrue and were made maliciously, with the intent of causing harm to the plaintiff,” McCaffrey’s claim says.

In November 2017, the claim says, Island Health terminated her, allegedly for “concerns regarding the performance of [her] duties” prior to her raising complaints about legal and compliance issues.

McCaffrey says no concerns were ever brought to her attention during that time. Rather, she says she was commended on her work many times.

In her civil claim, she says Island Health caused her stress, embarrassment and significant damage to her reputation in physically removing her from her position, maintaining she was medically unfit to work and telling her she would be disciplined without meaningful investigation.

The claim says Island Health’s conduct was “harsh, vindictive, reprehensible and malicious, departing to a marked degree from ordinary standards of decent behaviour and is worthy of rebuke from this Honourable Court.”

McCaffrey is seeking damages for breach of contract, bad faith, misrepresentation and defamation, and punitive, aggravated and special damages.

Original link to the article is here.