Compensation Act: Grieving relatives rally for change to aging law that denies them right to sue

Theresa Pereira was a healthy, active member of her community who looked and acted much younger than her 71 years when she died in hospital from an eye infection following laser eye surgery for cataracts.

“She was really, really healthy [before the operation] and then she was gone,” said daughter Beatrice Pereira of Surrey. “I was bitter. I was very angry. It was a very hard time for our family.”

Five years later, the family is still struggling to come to terms with her death in the very place they sent her for help – still uncertain why she died, whether her death could have been prevented, or whether other similar deaths will occur.

The family were shocked to discover that because Theresa Pereira didn’t earn an income and provide for dependents, there was no way under B.C. law to sue for a possible wrongful death. That also meant no judicial probe to determine what went wrong during her treatment.

“I did actually try to find out what happened through the College of Physicians and Surgeons,” Beatrice Pereira said, referring to the regulatory body that investigates complaints against doctors.

But it’s not the same as having an advocate and cross-examination as they would in a court case, she added.

“I knew I wouldn’t get her back but I really wanted to find out what happened,” said Pereira. “For me, it wasn’t about the money.”

On the surface, the push to reform the wrongful death law in B.C. is about money, or so-called non-pecuniary damages, but advocates say it’s more about accountability.

The Pereiras are among three dozen families who want to change a B.C. law based on legislation that originated in the United Kingdom 165 years ago. The law disallows damages for lost love, guidance, care, companionship and affection.

There are two rallies to urge B.C. to change its Family Compensation Act planned for today at 2 p.m. One is at the Vancouver Art Gallery and the other in Kelowna, where Stew Tuningley, a popular 74-year-old, was killed in July by a truck while doing roadside cleaning as a Westbank Lions Club volunteer.

Advocates of changing the law say B.C. is among the last provinces in Canada to allow for the suing of non-pecuniary damages for wrongful deaths.

“If we’re not last, we’re tied for last,” said Ben Doyle of the Trial Lawyers Association of B.C., which has drafted a proposed overhaul of the law that it calls the Wrongful Death Accountability Act.

Pereira is speaking at the Vancouver rally, staged by the Wrongful Death Reform Group, which she says represents 35 families, up from six when she joined in 2006.

Among them are the parents of Heidi Klompas, who died in hospital aged 17 after her legs were broken when she was struck by a car at a Stokes Pit bush party in 1997; Laura Jane White, who died in hospital at age 15 while being treated for leukemia; and Dallas John Hein, who was 25 when he was killed by a drunk driver.

Hein’s parents suffered the cruel irony of learning they could have collected on ICBC’s third-party liability insurance only if their son had survived the crash.

Vancouver trial lawyer Don Renaud said families “have a right but no remedy” to pursue answers in a wrongful death. “A right without a remedy is no right at all,” said Renaud.

“If people aren’t penalized, nothing can happen,” said Melissa Jarabek, whose mother died in a care home because of a nurse’s error.

“Somebody needs to be held accountable. There’s no accountability. It’s a slap on the wrist and there you go.”

Judith Jarabek-Gray of Abbotsford died in January 2010 after staff let the batteries on her ventilator run out, leading to her death, the Fraser Health Authority has admitted.

The care home changed procedures to prevent a recurrence, but Jarabek, who’s on the board for the Wrongful Death Reform Group, said there isn’t the same imperative for change in the health system unless there are financial consequences.

Attempts to change the Family Compensation Act, which covers wrongful deaths, date back at least until 2007 when then attorney-general Wally Oppal promised to act. More recently, former Liberal attorney-general Mike de Jong seemed keen to make changes, according to Doyle.

B.C.’s interim attorney-general, Shirley Bond, said in an email that the government continues to review the law and noted that MLA Ralph Sultan tabled a private member’s bill.

“We continue to consider next steps that may include legislative changes,” the email said.

Sultan said he tabled his bill – a copy of Alberta’s law, which caps payments at $75,000 – on the last day of the last legislative session and will likely have to retable it when the legislature re-opens on Oct. 3.

The Trial Lawyers Association and the families said Sultan’s bill is inadequate at best and insulting at worst, particularly because damages are capped at an amount that is not much of a deterrent.

“To me, that would almost be a slap in the face,” said Pereira, who said most of the reward would be lost to legal fees. She added that it’s unlikely she could find a lawyer to take her case because of the cap.

She also said that worries over courts awarding millions of dollars like they do in the U.S. are just fear-mongering.

Doyle didn’t sound optimistic that Sultan’s bill would make it to second reading and eventually into law.

“It’s our understanding that it’s not going anywhere because it doesn’t have the backing of the minister,” said Doyle.

Sultan himself said he has a lot of work to do to make it to second reading. He said ministry staff told him insurance companies opposed the changes.

Lindsay Olson of the B.C. branch of the Insurance Bureau of Canada said the last time the industry was consulted on any changes to the Family Compensation Act was in 2007, when it responded to specific proposals in a government green paper.

She said she couldn’t comment on the proposed new law by the Trial Lawyers Association. She added that insurance companies support the notion of adequately compensating claimants. 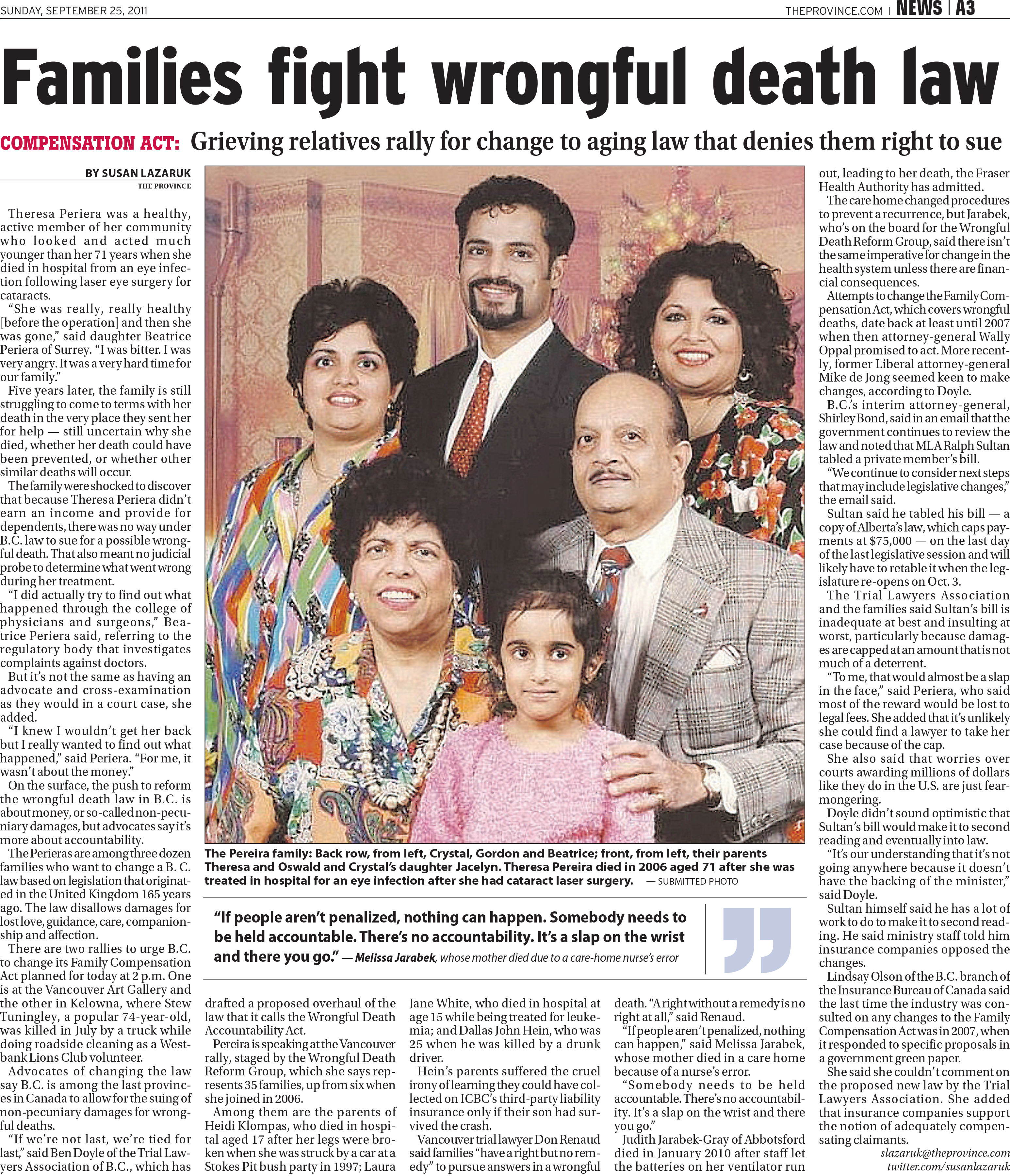