The daughter of a Penticton, B.C., couple who were allegedly murdered by one of their neighbours is suing both the accused killer and his wife.

Sarah Young’s parents, Susan and Barry Wonch, were killed along with two other residents of Cornwall Drive in April.

A former city employee who lived on the same block, John Brittain, is facing three counts of first-degree murder and one count of second-degree murder in relation to the killings.

In her notice of civil claim, Young names Brittain’s wife, Katherine, as “a conspirator to the murder.”

Both Katherine and John Brittain have filed responses denying the claims.

Her response also says she can’t be held liable for events outside her knowledge and control. 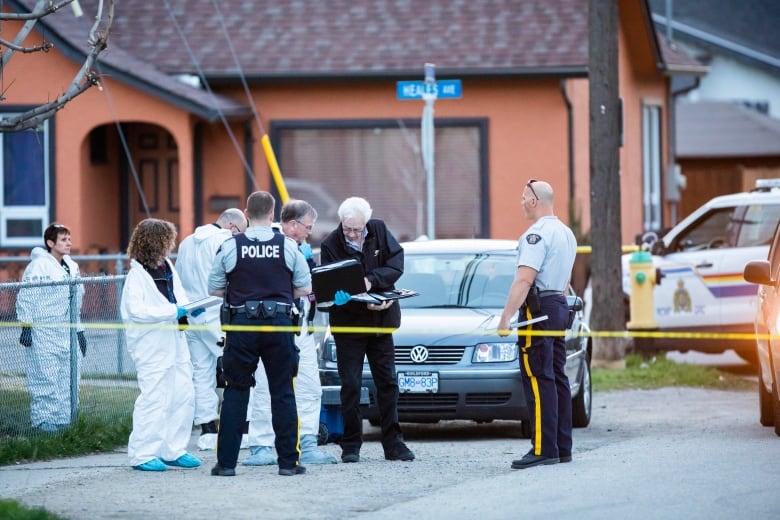 Police forensic officers investigate after a shooting incident that resulted in the deaths of four neighbours in Penticton, B.C. (Ben Nelms/CBC)

John Brittain is currently being held at the Okanagan Correctional Centre in Oliver, B.C., where he is awaiting trial for the deaths of Susan and Barry Wonch, Rudy Winter and Darlene Knippelberg.

The RCMP have not given any motive for the alleged crimes. The retired engineer’s next court appearance is slated for December.

Brittain filed a separate response in July denying that the deaths took place because of “wrongful act on his part.”

Young, who filed the lawsuit in June, is claiming damages under B.C.’s Family Compensation Act for the loss of guidance and companionship of her parents, loss of support and loss of inheritance.

The legislation allows for claims from the spouse, parents or child of a person whose death was caused by “wrongful act, neglect or default.”

None of the allegations have been proven in court.